SIP / VoIP gateway is based on the carrier board with a digital bus, on which the bladed interface modules can be installed (see starting from the upper right corner). The photo shows 6 modules installed and two more free space for the left. Interface modules have connectors for external audio devices. In the lower left corner is shown embedded ARM / DSP computer module.

The gateway is designed to provide the functions of digital voice “Voice over IP” (VoIP) and switching media streams via SIP in the air traffic voice system controller – pilot, according to the requirements of the standard ED-136 and ED-137 A / B EUROCAE.

As assembling unit, the gateway contains the base plate, which is set up to 8 interface expansion cards to connect external audio devices. The gateway acts as CWP site, and as a Radio Gateway that is installed on the receiving – transmitting radio center. In this case, the gateway has only one type of interface expansion card, which provides E & M interface for the external radio receiver or transmitter. In this version, a radio gateway can connect up to 8 stations.

Interface cards have the following versions for connecting devices:

The gateway is connected to:

Optionally in the CWP Site version SIP / VoIP gateway can be connected to the CWP control touch screen panel shown in the figure. This device is also developed by Primaria and shipped separately in different versions. 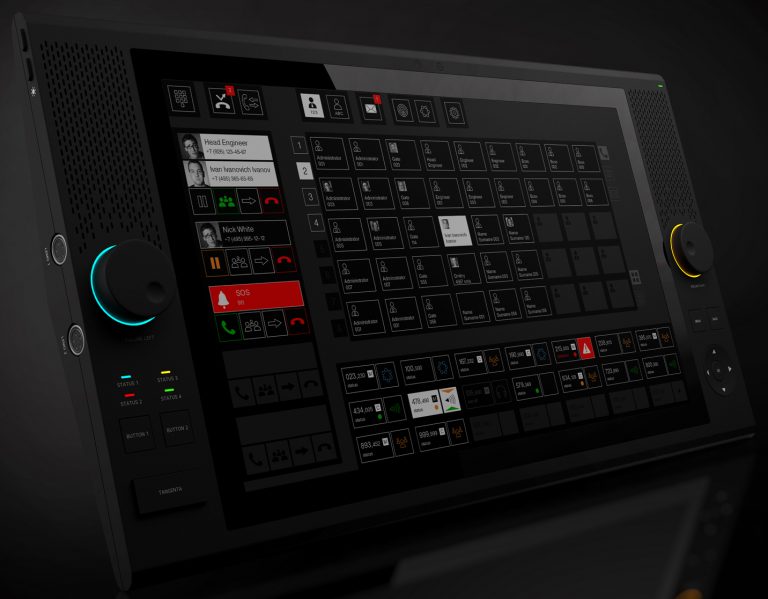 CWP touch screen control panel. It contains an open-frame display and capacitive touch glass. It can be equipped with additional built-in microphone and video camera. Contains a built-in two speakers and allows the connection of two redundant handsets

In this version Radio Gateway  is installed in a rack with radio equipment together to ensure the following connections:

The gateway contains built Ethernet-Switch Moxa company EOM-104 for the fast detection of the Ethernet connection failure network and switching to a backup.

The gateway G.703 (E1) interface is provided for recording voice signals to an external digital recorder, the type of RJ-45 connector.

In the CWP SIte version:

In the Radio Gateway version:

only one type expansion board: E&M module with one RJ-45 connector.

Power is supplied from one of two independent DC power supplies with voltages from 18 to 32 V. The transition from one power source to another is provided without interruption in the work.